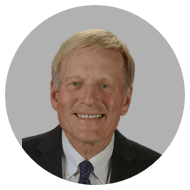 In 1970 he was employed at the Tulsa County District Attorney’s Office where he participated in or chaired twenty-five felony trials.  In February 1973, he was hired by the Hall Estill law firm in Tulsa.  He was subsequently employed in 1979 at Mazzio’s LLC as Senior Vice President and General Counsel until February of 2016.  He is still General Counsel for Mazzio’s.

Mr. Williams has been the Every Member Canvas Chairman at Saint John’s Episcopal Church on four different occasions.  He has also served on the Vestry at Saint John’s and on the Outreach Committee.  He was formerly on the Judiciary Committee of the Tulsa County Bar Association.  He has served on the Tulsa County Bar Foundation Golf Committee for over fifteen years.  He has also participated in the building of seventeen Habitat for Humanity homes in the Tulsa area.  His awards include the Gary C. Clark Distinguished Service Award from the Tulsa County Bar Association in 2015, multiple times on the honor roll in law school and the AmJur award in administrative law.

He enjoys numerous sports and has eleven years of Krav Maga training.

Mr. Williams is married.  He and his wife Nancy have two sons.  Brad III lives in Greenwich, Connecticut and Brent resides in London, England.  They have five grandchildren with two in the states and three in London.