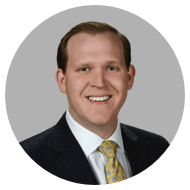 Donald (“Donny”) P. Stephens was born and raised in Mobile, Alabama.  He is a graduate of the Paul R. Carter College of Business at Harding University in Searcy, Arkansas, where Mr. Stephens obtained a B.B.A. in Accounting (2010) and an M.B.A. in Business Management (2011).  While at Harding, he was also a four-year letterman and two-time captain on the baseball team.  Mr. Stephens attended law school at the University of Tulsa College of Law and graduated in 2015.  While in law school, he received CALI Excellence for the Future Awards in Alternative Dispute Resolution and Non-Profit Law.  Before joining Richards & Connor, Mr. Stephens served as an Assistant District Attorney for Tulsa County, where he was a member of the Gang and Organized Crime Prosecution Unit.  As a prosecutor, Mr. Stephens represented the State of  Oklahoma in cases involving violent gang-related offenses and large-scale narcotics investigations.  Since joining Richards & Connor, his practice has been focused on professional liability matters involving the defense of healthcare providers against professional negligence and medical malpractice claims.  Mr. Stephens is a member of the Tulsa County and Oklahoma Bar Associations.

Mr. Stephens is married, and he and his wife, Megan, have three sons and a spoiled dachshund.  He enjoys spending his free time playing golf, woodworking, and spending time with his family.