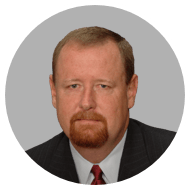 Jim Connor was born and raised in Bartlesville, Oklahoma, graduated from the University of Tulsa with a B.S.B.A. in Finance in 1983, and his law degree from the University of Tulsa College of Law in 1987. After working in the United States Attorney and the Public Defender offices in Tulsa throughout law school, Mr. Connor became the first law clerk for Federal District Judge Layn R. Phillips in Oklahoma City. Following his clerkship, Mr. Connor gained extensive experience trying cases as a partner in two other law firms in Tulsa and Oklahoma City until he joined the firm of Richards & Connor in 1997. Mr. Connor has tried approximately 100 jury trials, most of which were very high exposure cases. His practice primarily includes medical malpractice defense, products liability, bad faith, labor law arbitration, general commercial and business litigation, and personal injury litigation.

Mr. Connor is admitted to practice in Oklahoma, the United States District Courts for the Northern, Eastern, and Western Districts of Oklahoma and the Tenth Circuit Court of Appeals. He has tried cases in all of these courts as well as in every corner of the state, and has taught many continuing education classes dealing with various aspects of litigation to both attorneys and physicians. Mr. Connor has handled numerous cases resulting in published decisions on topics including medical malpractice, products liability, insurance coverage, antitrust and the judiciary. He was twice named Tulsa Best Lawyers Medical Malpractice Defense Lawyer of the Year, 2022 Personal Injury Lawyer of the Year, and 2023 Products Liability - Defendants Lawyer of the Year, is listed by Super Lawyers as one of the Top 50 lawyers in Oklahoma, and has enjoyed an AV Preeminent Rating from Martindale-Hubbell for many years. He is a Fellow of the American College of Trial Lawyers (2008) and a Fellow of the International Academy of Trial Lawyers (2016), the two most exclusive and prestigious trial lawyer organizations one can only be invited to join.

Mr. Connor’s success and intense competitiveness as a trial lawyer emanate from his background in athletics. He was a 2-time state champion tennis player in high school, an All American, 3-time conference champion, a 4-year letterman at the University of Tulsa, and is a 2-time inductee into the Bartlesville Athletic Hall of Fame.  Mr. Connor competes nationally as a Master Class shooter in Sporting Clays and has been a member of many Oklahoma All State Sporting Clays Teams.

Mr. Connor is married and has two children, a son-in-law, and three beautiful grandchildren. He is a past president of the Junior Comet Football Association, served on the Bishop Kelley High School Board for several years, coached junior basketball for 12 years, and is active in the Tulsa community. He enjoys hunting, fishing, shooting, motorcycles, and doing anything with his family.