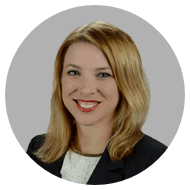 Kelsie Mynon Sullivan was born in Denison, Texas, and graduated from Enid High School in Oklahoma. She attended The University of Oklahoma for her undergraduate studies in Public Relations before being admitted to the University of Oklahoma College of Law where she graduated with distinction. During law school, she was a member of the American Indian Law Review and was the American Bar Association Representative for OU. Ms. Sullivan is admitted to all Oklahoma District Courts, the U.S. District Courts for the Western, Northern, and Eastern Divisions, as well as the Tenth Circuit Court of Appeals.

Her specialities include direct representation of insurance carriers in personal and commercial coverage and bad faith litigation. She has served as lead counsel through jury trial verdict in all aspects of the litigation. Ms. Sullivan has extensive experience in complex institutional discovery matters, expert witness discovery, electronic discovery and executive level depositions. Her experience all includes negotiation of multi- claimant settlements involving insufficient policy limits and the defense of multi-jurisdiction lawsuits.

Ms. Sullivan joined Richards & Connor in 2015, after spending almost 10 years practicing in Oklahoma City. She has defended numerous clients before governmental agencies, including the Merit Protection Commission, the Department of Labor, OSHA, and the EEOC. She also authored and assisted in implementing employee guidelines for employers ranging from 5 to 5,000 employees.

Ms. Sullivan has published articles and taught courses on social media and its place in employment law and the general practice of law. She was named an Oklahoma Super Lawyers Rising Star in 2012, 2013, and 2014. She was the Ruth Bader Ginsburg American Inn of Court Outstanding Barrister in 2014 and received an invitation to the Rue’s Ratings America’s Best Lawyers in 2014. She was the OBA Labor and Employment Section Secretary for 2015. Ms. Sullivan has sat on the Boards of Directors for the Red Bud Foundation and the Oklahoma Junior Hospitality Club. Volunteer activites include Oklahoma Lawyers for Children and Tulsa Lawyers for Children..

In her free time, Ms. Sullivan enjoys sharing her love of the outdoors with her family.