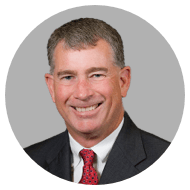 Phil Richards is a trial lawyer whose practice is focused on representing businesses and insurers, particularly in the areas of insurance coverage litigation and insurance bad faith litigation.  He has repeatedly been selected as one of Oklahoma’s Top 10 Super Lawyers and listed as Best Lawyers’ 2012 Tulsa Insurance Lawyer of the Year.  He has also been selected for inclusion by the Best Lawyers in America for the past several years in the practice areas of Bet-the-Company Litigation, Commercial Litigation, Insurance Law, Medical Malpractice Law – Defendants, and Personal Injury Litigation – Defendants, as a Top Lawyer in Financial Services by Corporate Counsel Magazine, and as a Top Rated Lawyer in Insurance Law by The American Lawyer & Corporate Counsel magazine.  He maintains a Martindale-Hubbell rating of AV Preeminent, and is a Fellow of the American College of Trial Lawyers and a Fellow of the International Academy of Trial Lawyers.

Mr. Richards graduated from the University of Oklahoma College of Law in 1983 and began his practice as an Assistant District Attorney in Duncan, Oklahoma. In 1984 he returned to his home town of Tulsa to practice civil law, joining a firm in which he became a partner in 1988. In 1997 he formed the law firm that is now Richards & Connor.  He has tried over 100 cases to verdict before juries in state district courts throughout Oklahoma and in all three of Oklahoma’s federal district courts, and has handled appeals in both the Oklahoma appellate courts and the Tenth Circuit Court of Appeals.  He has also litigated insurance coverage matters in Arkansas and Kansas.  Mr. Richards is admitted to practice before all trial and appellate courts of the State of Oklahoma, all federal district courts in Oklahoma, the Tenth Circuit Court of Appeals, and the Supreme Court of the United States.