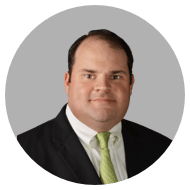 Sidney D. Smith, Jr. was born and raised in Tulsa, Oklahoma.  He graduated from the University of Oklahoma with a bachelor of arts in History.  Mr. Smith attended the Dedman School of Law at Southern Methodist University and graduated in 2004.  Since graduating from SMU, Mr. Smith’s practice has been devoted entirely to civil litigation.  From 2004 to 2008 he practiced in Hawaii before returning home to Tulsa.  Upon moving back to Tulsa Mr. Smith began representing healthcare providers in professional negligence claims.  Since 2008 his practice has been devoted nearly exclusively to professional liability matters.  Mr. Smith joined Richards & Connor in 2014 to continue defending healthcare providers against medical malpractice claims.  In addition to being a member of the Oklahoma Bar Association, he is admitted to practice before the United States District Courts for the Eastern, Northern, and Western District of Oklahoma.  He has also been admitted to the United States District Court for the District of Hawaii and all Hawaii state courts.

Sid is married and has 3 young children.  He enjoys spending time with his family, reading, hunting, and fishing.